For this booklet - the 97th publication produced by Temporary Services - we decided to work with some long-respected peers: the Chicago-based collaborative group Lucky Pierre. The folks in Lucky Pierre have been friends of ours for years. We have included the group, and members of the group, in a couple past projects in a pretty minor way, but we had never really collaborated with them or done something substantial together.

Lucky Pierre was founded in 1996 by Michael Thomas and Mary Zerkel as a collaborative group working in writing, performance, and visual forms. Lucky Pierre creates structures for open forms of engagement with various publics. In these forms, we explore complex issues and ideas (political, aesthetic, social) in ways that accommodate a wide range of experience, styles and approaches. The open structure allows collaborators and viewers to define their own participation; helping to create the meaning, and determine the final form and outcome of the work.

This booklet is part of Lucky Pierre's contribution to The Chicago Torture Justice Memorials Project. That project describes itself as follows:

"The Chicago Torture Justice Memorials Project invites artists and justice seekers to submit proposals for a speculative monument to memorialize the Chicago police torture cases. Our goal is to honor the survivors of torture, their family members and the African American communities affected by the torture. The monument will also recall and honor the nearly two-decades long struggle for justice waged by torture survivors and their families, attorneys, community organizers, and people from every neighborhood and walk of life in Chicago."

When we read Lucky Pierre's list of Actions for Chicago Torture Justice on their website, we got goosebumps. The group took one of the darkest chapters in Chicago's history - there were over 110 victims, all African American men, tortured by John Burge and others in the Chicago Police Department - and turned these atrocities into a list of actions that is constantly shifting its tone and energy: poignant and moving, furiously angry, solemn, poetic, abstract or at least a little mysterious, and even darkly comical. We wanted to see this text as a thing in the world - an object that could circulate, get sent in the mail, change hands, be shared with students, be left on the seat of a bus, and could endure as a printed record of response to what happened in Chicago. We wasted no time in inviting Lucky Pierre to let us publish this as a booklet and in a little over a month, the publication rolled off the press. The booklet includes the first 100 actions written by the group. The project is also a call for participation and welcomes the reader to submit additional actions.

Here are the first 10 actions in this booklet:

1. Think about torture. Create an action to address torture. Use facts. Use metaphor. You can even use humor. Be as general or as specific as you'd like. Write the action down. Think about performing the action. Perform the action.
2. Tell people what happened.
3. Go to a pet store, buy a puppy, bring it home, burn it with cigarettes.
4. Attend Truth Commission hearings.
5. Sentence your notion of Diffused Responsibility to death by lethal injection.
6. Engrave the word DENIAL on a tombstone. Spit on the grave.
7. Build two birdhouses, one for a bird that is near and the other for a bird that is far. Install the birdhouses as far from each other as possible.
8. Go to a furniture store and find something you like something that really jumps out at you. Think of how that object could be used to inflict pain, injury, or death at the hands of a strong individual or individuals.
9. Slap someone on the back daily. Tell them they are doing a great job.
10. Run straight ahead as fast as you can while trying to forget how to stop.

We are thrilled that Lucky Pierre has agreed to let us publish their astonishingly strong text. This booklet, designed by Lucky Pierre, was offset printed in Chicago by our good friends at Mission Press. Lucky Pierre members for 100 Actions for Chicago Torture Justice are Thomas and Zerkel, Holly Abney, Travis Hale, Kevin Kaempf, Jeffrey Kowalkowski, Heather Lindahl, Tyler B. Myers, and Bill Talsma. 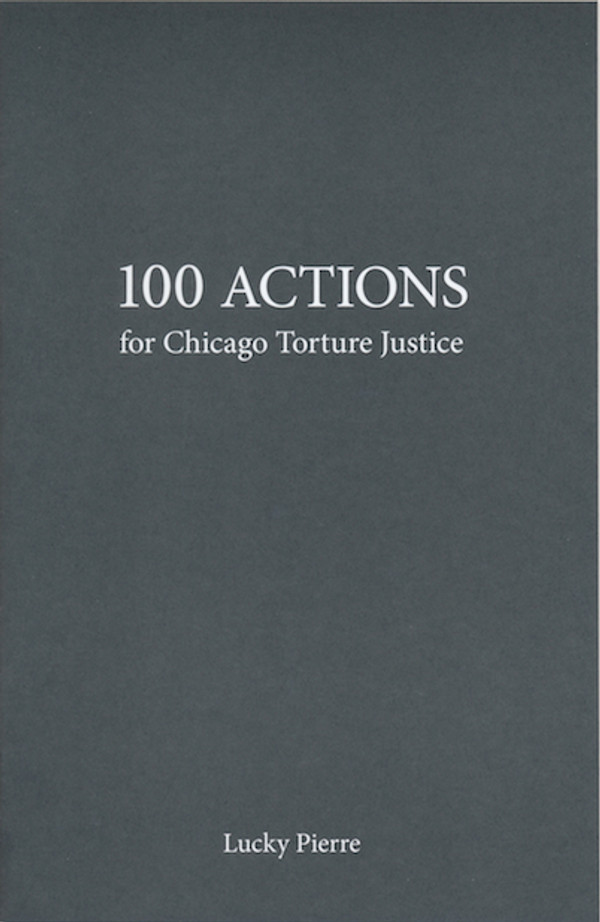