A wonderfully designed publication, complete with bound in U.S. Constitution, produced by our friends in Lucky Pierre - the only still active artist group from Chicago that has been around for a little longer than Temporary Services! This book functions as an effective document and record of a smart and epic 13 hour event titled "America/n" that Lucky Pierre organized on election day, 2012. It is described as follows:

"On election day November 6, 2012 during polling hours (6am to 7pm), Lucky Pierre, Defibrillator and 24 guest presenters worked through this American project as defined by the United States Constitution. We started at the Preamble "We the people..." and worked our way through to the end - "The Congress shall have power to enforce this article by appropriate legislation." Drinks were, of course, served after Prohibition was repealed.

Prior to election day, each participant researched a pre-selected section of the U.S. Constitution. During the event, the 24 collaborators presented their findings as twenty-four 30-minute presentations / discussions / songs / performances / polemics. There was a lot of discussion."

The book also includes a Preface by Lucky Pierre co-founder Michael Thomas, who presents a particularly sharp articulation of the group's creative approach in organizing events with so many participants like this.

Note that only 150 copies of "America/n" were printed and many went to the contributors so if you want one, don't wait until the next Presidential election to pick up a copy! 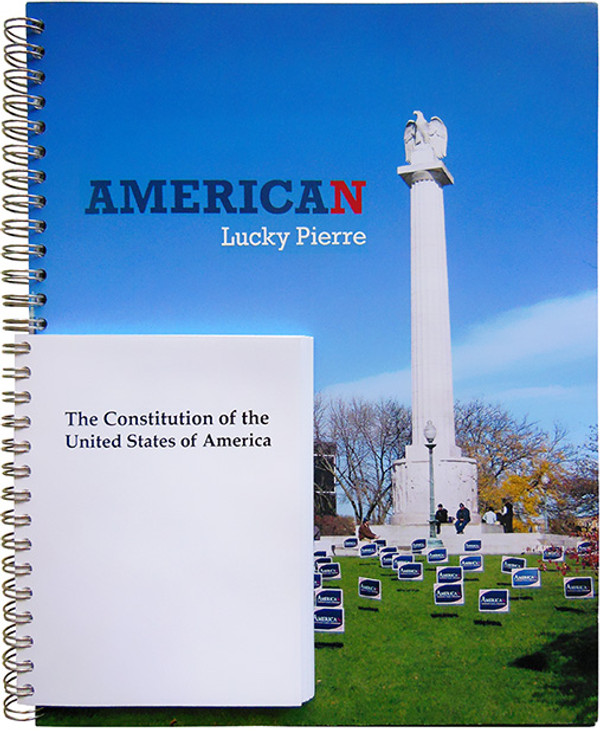