We always welcome a new issue of AREA Chicago with much enthusiasm and this issue is no exception. Here's what the publishers have to say about this issue's theme:

"Intersections is very much a buzzword  from the snazzy image of Chicago as a crossroads within mainstream tourist narratives, to efforts at movement building among dominant and entrenched political organizations, and even the institutionalization of intersectional analysis within academic programs. Here we seek a different set of questions about how we cross paths, how we build and sustain connections across lives full of contradictions, across a city built on divisions and inequalities. It is easy to assume that intersection is somehow implicit in the efforts of a project and organization like AREA. Our task is to ask questions about the types of intersections, their quality, and the effects of our efforts."

Features writing by many, including: Iván Resendiz with Mónica Díaz Terrazas, a tribute to Christopher Drew, Bert Stabler on the Torture mask project at Bowen High School, John Prius, Brian Holmes, Karma Chávez, Ryan Conrad, and Yasmin Nair, for the radical queer collective Against Equality, Julie Niemi, Ana Luna, and Angela Rivers and Sharon Irish among many others. This issue also has a great memorial to our dear friend Dara Greenwald. 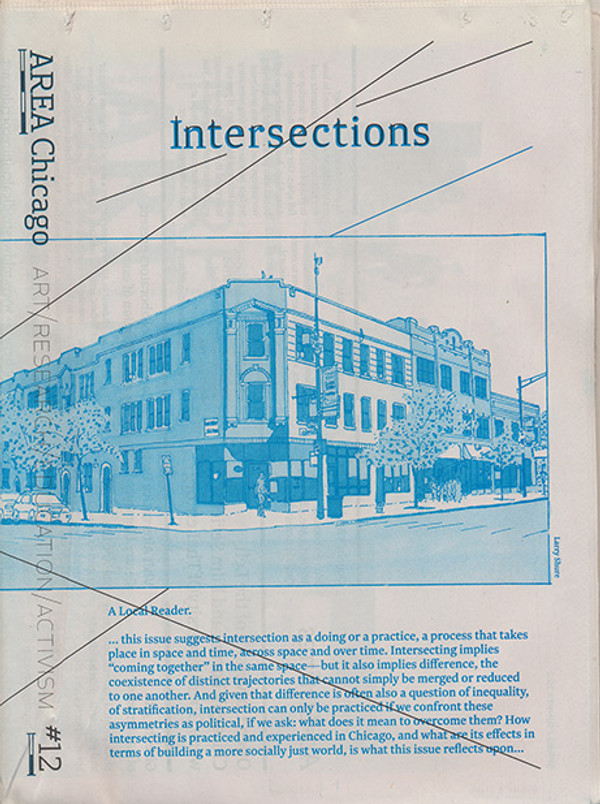