Creating knitted sweaters that are personal message boards and an unexpected site of political protest is really smart and exciting! The sweaters look fantastic and immediately turn one's body into a public space with the potential for creating discussion, if not general provocation. We are happy that Printed Matter published this book of sweater patterns, and hope that Auerbach makes more books like this.

Synopsis: Published to coincide with Lisa Anne Auerbach's 2008 exhibition at Printed Matter, this artist's book brings together the various facets of Auerbach's artistic practice, which has included zine making, co-organizing the High Desert Test Sites project, and knitting. Political, relational, humorous, and instructive, it offers the reader step by step instructions on how to knit sweaters and skirts that feature a variety of snappy slogans ("When there's nothing left to burn, you've got to set yourself on fire" and "Yes we can! No we McCain't!" are two examples.) With full-color glossy photos of Auerbach and friends modeling her fashions on photoshoot that actually succeeds in making juggling and unicycling look cool.

Read what others have to say:

[...] Auerbach has deliberately pursued knitting as a formal art-making strategy. She has recast knitting from its traditional role as a nostalgic or otherwise personally historic language to an idiomatic armature on which to pin sociopolitical commentary. It's fine art about radicalized women's work, belonging to a tradition of art making that is rooted much more firmly in conceptual art than traditional garment or textile craft and trade. (READ MORE...)
- By Shana Nys Dambrot, Fiberarts Magazine 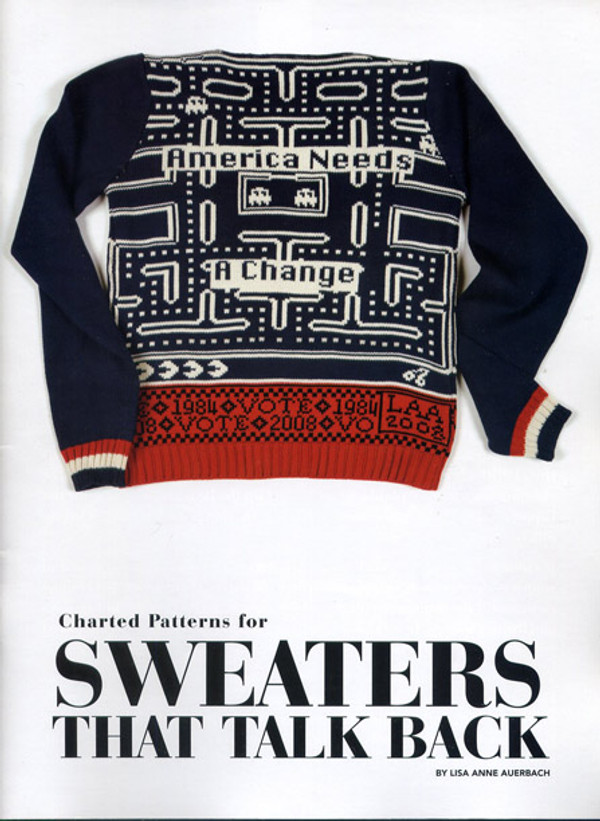