Times are tough for publishing books and periodicals in the U.S. Hell, it is tough for most people in general. We are happy that the folks at the Journal of Aesthetics & Protest didn't let the deplorable conditions, of our economy and country, keep them from printing a new issue of their magazine! Though this is their thinnest volume to date, and a dramatic change in format, the result is concentrated, and high-impact. Everything is streamlined including the design, by Jessica Fleischmann, which is really sharp.

Here is an excerpt from the introduction to give you a sense of the tone and what is included in this issue:

We feel it is important to list things we are suspect of at this moment. The current system of precarious labor (contract work, creative work, temp jobs) sucks and we partially asked for it. Art is often used as a gentrifier and often generates more social inequality than resistance. And we think that resistance, when seen as semiotic, is not transferable between contexts- though resistance used as a marketing tool is. We are suspect in the fact that "art" and "creativity" are now ubiquitous and a part of our daily life, though it doesn't feel like what the Dadaists and the Situationists were after. It often feels like a wet sock.

Things feel in flux, and we believe in our 7th issues sincere effort to celebrate the process of re-making things and thoughts. It is a good approach. In this issue, we are excited by our decision to publish conversations in process, and to not print capstone theories. Ideas are in the making. We are also excited that we're publishing bits of projects- views into praxis and representations of theory in action. This is our first issue under another president than GW Bush and we all feel the ever-increasing pressure screws of the economic crisis.

Read more in a printed copy or online at the Journal's site. 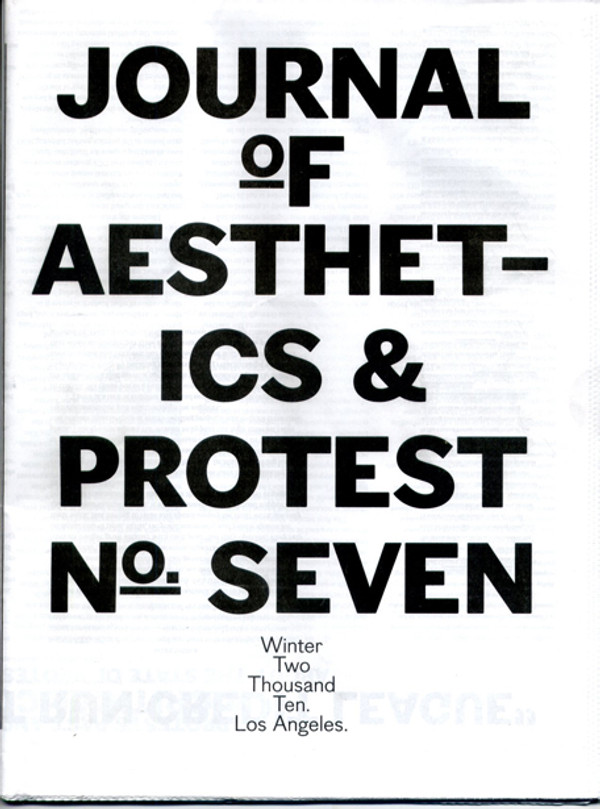