We were very happy to support the efforts of Radius by letting Jeff Kolar print his newest booklet on the Half Letter Press Risograph. The ambitious work of Radius continues with regular new broadcast projects and it's great to see them take the time to chronical these efforts in print from time to time - particularly by including short interviews with the artists as they do in this booklet. Here are the details on GRIDS direct from the tip of the antenna:

The GRIDS series consists of four mobile commissioned radio broadcasts at four different Chicago geographical locations throughout the 2014 calendar year. The transmissions occurred at either working or now defunct electrical production or distribution centers. Using a low-power FM transmitter - the Audio Relay Unit - that can be powered by solar panels, the broadcasts specifically addressed how energy is produced, distributed, and consumed in the event of radio broadcast. Radius has previously supported and broadcast audio work that makes inaudible energy fields audible. GRIDS continues to investigate the sonic qualities of electromagnetic energy and specific sites that produce this energy.

Using the concept behind the Intermod Series, which produced the Audio Relay Unit, as a point of departure, Radius commissioned four artists to create work that create disturbances to the electric-powered grid. Since the Audio Relay Unit is mobile, it has the opportunity to create situations of intermodulation - situations where two waveforms meet in friction. Therefore, the works commissioned propose questions about the power grid as a fixed unidirectional system of energy production and distribution. Language about the power grid mimics language about radio broadcast - both describe what they do as transmission from a source to a consumer or receiver. GRIDS is interested in how energy is propagated, what the distance of that propagation is, and what it means to be a node in the networked grid.

Radius commissioned four artists to create audio works for broadcast that point to issues of energy propagation in the event of radio transmission.

Sonic Deep Map consists of various recorded materials gathered at the Case Pyhäjoki camp for artists, theorists, scholars, cultural producers, and activists that responded to the threat of nuclear power in Pyhäjoki, Finland. Case Pyhäjoki, organized by Mari Keski-Korsu, Pixelache, Hai Art, and the Finnish Bio Art Society among others, took place during August 2013 for two weeks. During Case Pyhäjoki, Radio Aktiv learned about the small town in Finland that is facing possible construction of a nuclear power plant.

Hum responds specifically to the Jefferson Substation, an electrical substation that is located just outside the loop of downtown Chicago. The step down transformers at the Substation emit an audible 60 cycle hum. This rich harmonic drone permeates the surrounding city blocks. For this site-specific radio broadcast, installation, and performance, Rose assembled a small choir of vocalists who will be positioned at a near distance to the transformers. The choir hums the overtone series in harmony with the transformer’s buzz.

electrosmog is concerned with themes of electromagnetism and material processes which sonify inaudible events. Using an electrosmog high frequency receiver, Roos captures sounds produced by mobile phones, wireless phones, wifi, microwaves, and other electronic devices (between 800 MHz - 2.5 GHz). Important to electrosmog is that wifi operates on the same frequency as a microwave oven (2.4GHz), and when modulated into audible frequencies, wifi sounds like pops and clicks and a microwave creates a deep drone.

Giants Are Sleeping aims to reflect the identity, transformation, and ownership of one Chicago electrical substation. Exploring the relationship between human memory and architecture, the installation pairs an interview with Kenneth Corrigan, a bookseller who inhabited the abandoned electrical substation in 1984, with a charcoal animation that uses substation photo archives as its main reference. Drawing techniques are the vehicle to convey symbolic connections that link the historical aspects of these buildings, while the radio becomes the narrative’s voice over. 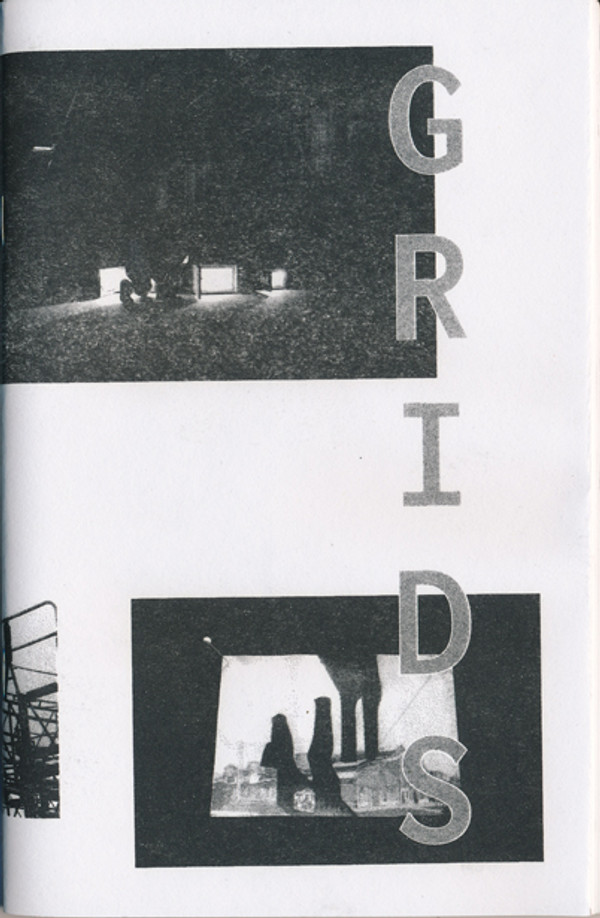 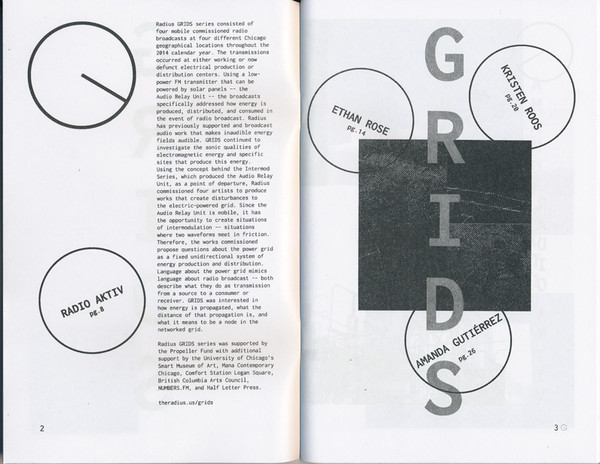 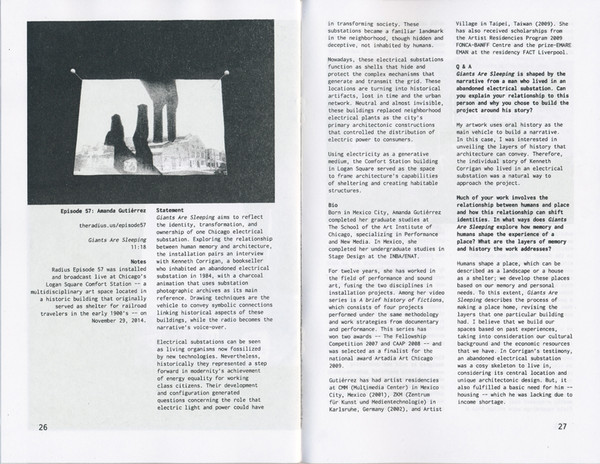 Site of Sound #2: Of Architecture and the Ear