At a time when questions of place are active in dialogues around globalization, cultural identities, and the loss of public space, how are artists, theorists, and architects imagining space? How does contemporary art make use of architectural vocabularies and histories in the fabrication of objects and events? What is the ongoing role of conflicting models of site-specificity in contemporary art and architecture?

Surface Tension examines the conversations that occur as negotiations between cultural production and the place of its reception. Such conversations are underscored as inherently complex, embodying intersections of the imagined and the real, and the intensities surrounding art, performance and architectural productions that seek public potential. The anthology explores site-specific practice and its legacy through critical and creative essays by leading theorists, architects, and artists from around the globe, including an insightful interview with Gordon Matta-Clark from 1976, a controversial essay by Juli Carson on the lingering debate surrounding Richard Serras Tilted Arc, Margaret Morgans plumbing of Modernist depths via the semiology of the toilet, and Kathy Battistas unearthing of women artists groups in London from the 1970s. These are complemented by rarely heard audio works by Bruce Nauman and Yoko Ono, documentation on the Dutch artist Paul Panhuysens architectural and installation works and Rafael Lozano-Hemmers recent and highly-acclaimed public project in Rotterdam, excerpts from Eyal Weizman/Rafi Segals censored contribution to the World Congress of Architecture from 2002, as well as works by LA-artists Michael Asher and Simon Leung whose contextual practices address the politics of representation and public space.

Surface Tension looks towards proximate space and experiences of locality to tease out the tensions between global consciousness and the site-specifics of everyday life. This entails a consideration of the desires and impulses that occur within and against the contexts of cultural arenas, and how such interactions perform within the dynamics of spatial organization. Out of these relations comes the radically diverse ways space can be negotiated, manipulated, and traversed.

Special review of the book, for HLP, by Regional Relationships (Ryan Griffis and Sarah Ross):

Written in 2003, "Surface Tension: Problematics of Site" is an ongoing series of publications that address art and public space. The first book weighs in at more than 300 pages packed with critical essays, short project descriptions and more reflective writing on cultural practices past and present. Edited by Ken Ehrlich and Brandon Labelle (with an edited CD by Stephen Vitiello), the book, as its title suggests, is a critical examination of site-based art practices. What "Surface Tension" does that makes it stand out from more historical or academic texts on the subject however, is the contributions from practitioners, in the form of projects and project descriptions. For Regional Relationships, a project that anchors itself in the tension between site-specificity and mobile media, books like this are necessary reference points. Surface Tension brings together what performance studies scholar Diana Taylor labels the "archive" and the "repertoire." Embodied, specifically located forms of practice are both documented and realized in the form of the book. Theoretical and historical accounts by writers as disparate as Lucy Lippard and Simon Leung bracket presentations of diverse projects by Laurie Palmer, Rafi Segal/Eyal Weizman and Jane Rendell. What we particularly like about "Surface Tension" is the intellectual and aesthetic generosity it establishes by focusing on the questions of site rather than on the often false solutions offered by narrow, professionalized and disciplinary mechanisms. It exists in, and primarily discusses, a somewhat rarefied art discourse, for sure, but it also presents rigorous cultural observation, engagement and experimentation as a necessary tool to reimagine the relationships between cultures and publics. 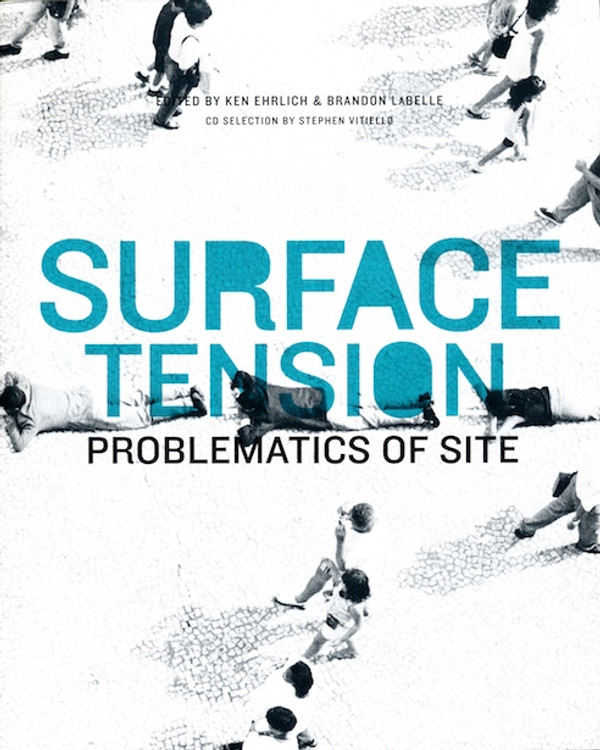