Out of stock
$5.00
By Temporary Services
Chicago, IL: Temporary Services, March, 2001 (reprinted March 2015) (reprinted again September 2017)
Pages: 36
Dimensions: 8.5 in x 5.5 in
Cover: soft
Binding: staple-bound
Process: RISOGRAPH
Color: Teal ink on cover, black in throughout
Edition Size: 122 (125 copies reprinted in 2017 with Medium Blue covers)
ISBN: none
"With The Library Project, Temporary Services is adding 100 new books and artists' projects into the library holdings through a donation. The library has not been told about the gifts they are going to receive."
Back in print for the first time in years!
Chances are if you've heard Temporary Services give a lecture, we've talked about this project. It's still one of the most ambitious things we've organized, and arguably our most subversive project. This booklet, originally created for the project's launch, includes a lengthy essay, a great selection of quotes about other creative actions and issues surrounding libraries and library books, some texts pulled from Chicago Public Library sources, and a full inventory of all of the artists and books that we included in the project: over 60 people!
From the main essay:
"The Harold Washington Library Center in Chicago is the largest municipal, public, circulating library in the country. The building opened on October 7, 1991 with over six million books and periodicals ready for the public to use. The Harold Washington Library is unquestionably one of the most important, prominent, and valued cultural institutions in Chicago. Despite its great size, beautiful architecture, massive holdings, and extensive art collection, Temporary Services feels that this library should offer the public a little more.
With The Library Project, Temporary Services is adding 100 new books and artists' projects into the library holdings through a donation. The library has not been told about the gifts they are going to receive. Every title has been checked against Harold Washington's catalog to verify that each book is not already owned by the library. Several books that are already in the collection, are being added in creatively altered new versions. We are giving the Library books that it has not acquired on its own. We believe these are books that it will probably want to keep. Nearly all of the books are brand new and most of them were published or created within the last few years.
Though composed almost entirely of books by artists, this gift will infiltrate all of Harold Washington Library and not merely the floor devoted to Visual and Performing Arts. Creating new juxtapositions of materials not normally possible in common library practice is one component of this project. Another major goal is to bring obscure, subversive, self-published, hand-made, or limited edition works by underexposed artists to a wider audience.
Placing these books and projects in the Harold Washington Library may be the most democratic way of presenting this work within the City of Chicago. The Harold Washington Library is centrally located and serves a large, diverse public. An average of 6,000 people visit the library every week. The library is just two blocks away from Temporary Services' 202 South State Street office space - it is our neighborhood library. More importantly, the library is easily accessible from all parts of the city using public transportation. It is close to other major cultural institutions and it is convenient for many people that commute to the downtown area for school and work. All of these factors were major considerations when the choice was made to place books in this institution.
Every reasonable effort has been made to make the donated books look like they already belong to Harold Washington Library. They have call numbers on their spines, manila cardholders that are ready for the due date cards provided at the circulation desk, Reference stickers, and facsimiles of other Chicago Public Library stamps and markings. Supplies have been purchased from the same mail order outlets that most libraries use. In some cases, books that were originally discarded by HWL were purchased from the library's store for their bindings or stamped forms and cardholders. These tactics have been used to properly integrate the artists' works using the library's preferred methods. It is our hope that this effort will encourage the library to retain these books so that they can actually circulate or remain in the building as reference material."
This project actually led to our group having a wonderful relationship with the Fine Arts librarians at the Harold Washington Library Center and if you visit the 8th floor Art Reference desk and ask to see the books they've found from The Library Project, they'll happily show them to you in Special Collections! The library has managed to find and save about a third of the books we placed. Some simply disappeared and some are actually still being found on the shelves after all of these years! You can also view a lot of booklets by Temporary Services in the Chicago Artist Reference Collection at the Harold Washington Library Center - also on the 8th floor.
Current Stock:
Weight:
0.25 LBS
Width:
9.60 (in)
Height:
6.50 (in)
Depth:
0.50 (in)
Shipping Cost:
Calculated at Checkout
Close 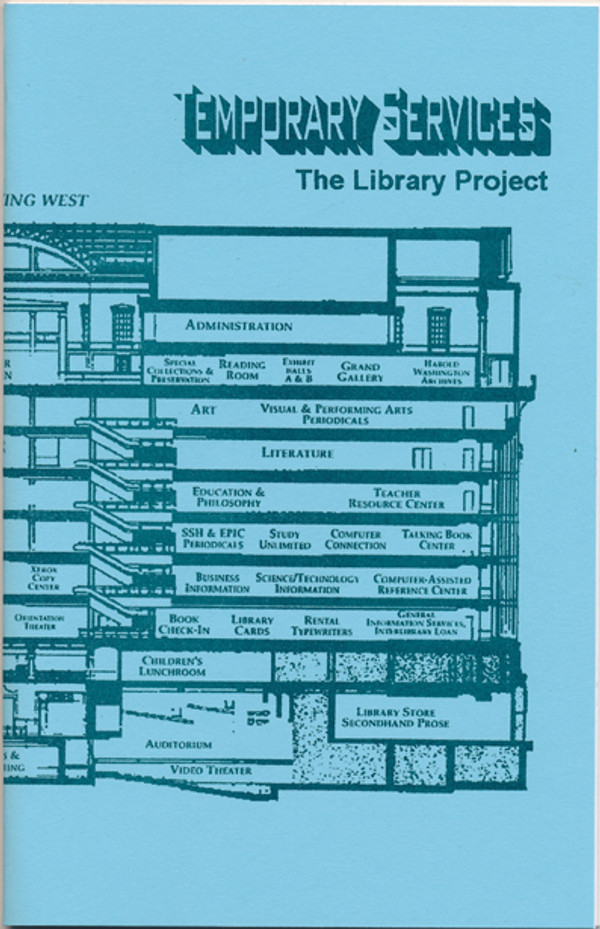 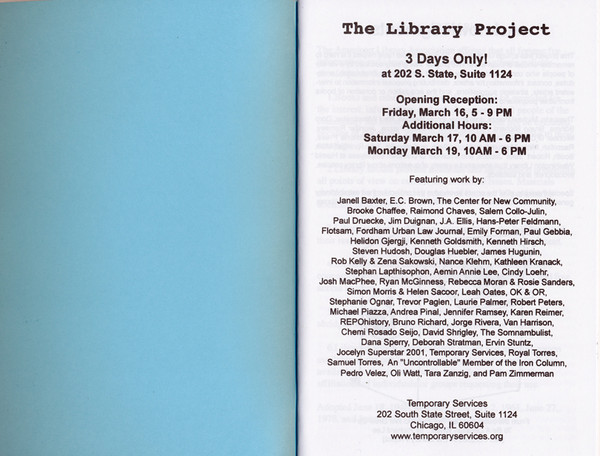 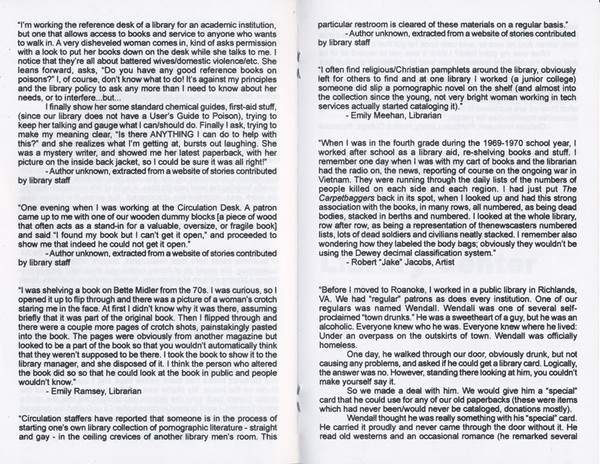 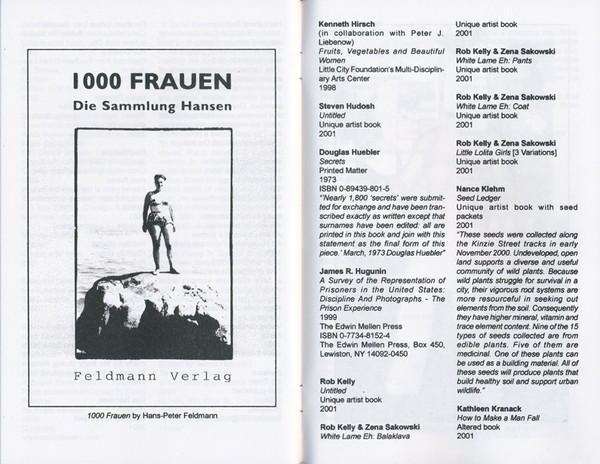 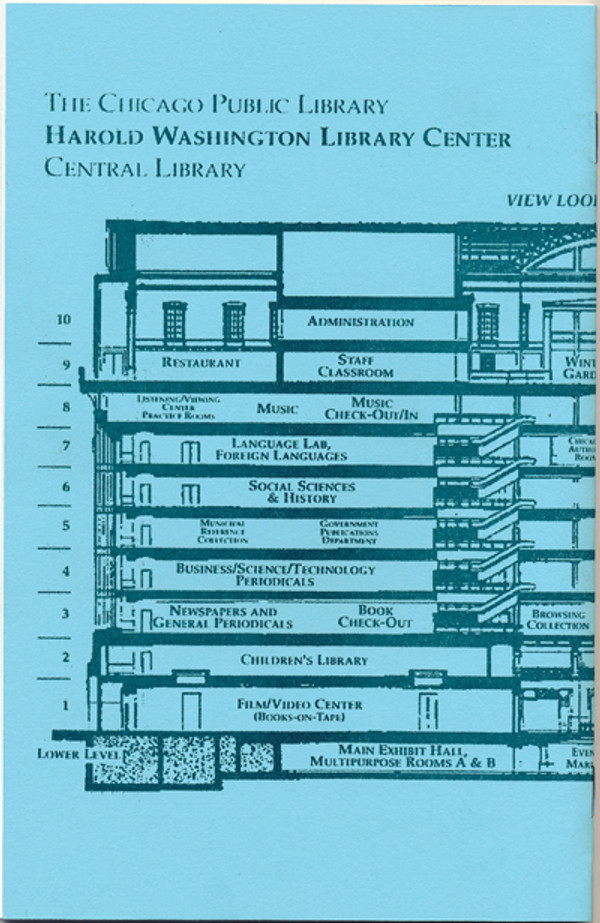 Publishing in the Realm of Plant Fibers and Electrons