A surprise quickie Hardcore Architecture release from Marc Fischer / Public Collectors reflecting on the first issue of his first zine from way back in 1988. Despite being only a folded card-stock sheet, this has about 2500 words worth of new writing. From the back cover:

I was a junior in high school, living in the suburbs of Philadelphia. My zine was called Primary Concern and the first issue was ambitious: 26 double-sided, photocopied 8 1/2 X 11 inch pages with five band interviews, record, concert and zine reviews, opinion pieces, and a couple articles. I printed at least 150 copies. The copying was done on weekends at the downtown office where my dad worked. He let me use their machine and I went through a ton of paper and toner. I kept publishing after I moved to Pittsburgh for college in 1989 but by my junior year I was too busy with school and having a girlfriend to continue. I started publishing again as part of my art practice in 1997 and I’ve been going non-stop since.

Today is November 2nd and it’s my 47th birthday. Tonight I’m going to a punk show in Chicago, where I live, and the show is having One Page Zine Day. This idea is new to me. The invitation to make a one page zine to exchange with others is excellent. It provides an opportunity to celebrate the creativity of attendees who may not be musicians, but don’t just want to be spectators either. One double-sided page is an unusual format for a zine but in the 1980s, Mike Bromberg, who published the chaotic handwritten punk zine Bullshit Monthly from New York City, made at least one issue that was nothing more than a single 11 X 17 inch sheet. It was filled with energy and information and I hope this attempt feels as solid.

What this zine is about: inside this sheet, I reprinted a scan of the playlist that appeared in issue #1 of Primary Concern. This is what I was rocking out to in 1988. All of the commentary that follows was written between October 31st and November 2nd, 2017. The printing was done on a RISOGRAPH duplicator. I’d like to thank Grace Ambrose and Ralph Rivera Jr. for telling me about their bands’ show, which led to this publication. It was energizing and fun to do this and hopefully it won’t be my last one page zine. — Marc Fischer

Hardcore Architecture explores the relationship between the architecture of living spaces and the history of underground American hardcore bands in the 1980s. This booklet is intended as a supplement to the website: hardcorearchitecture.tumblr.com. It is one of a series of printed publications addressing the themes of the project through writings, interviews, photos, and printed ephemera. Hardcore Architecture is a project of Marc Fischer and Public Collectors. 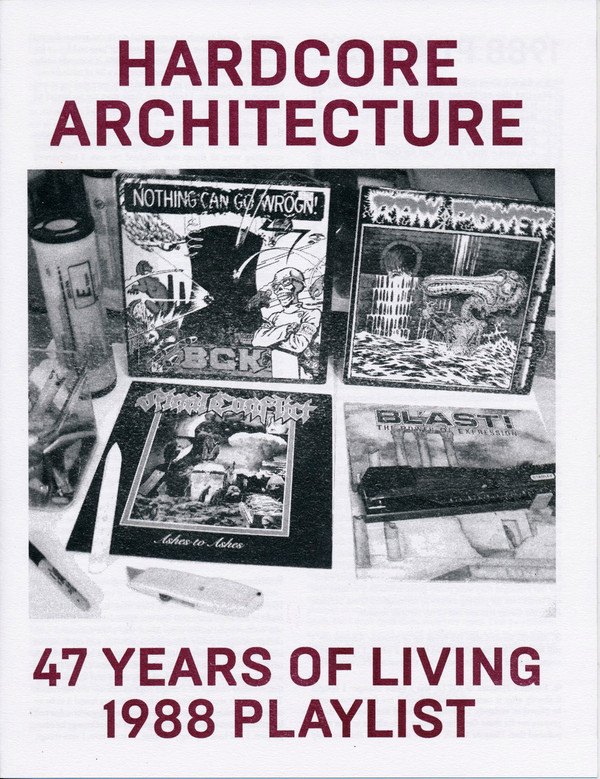 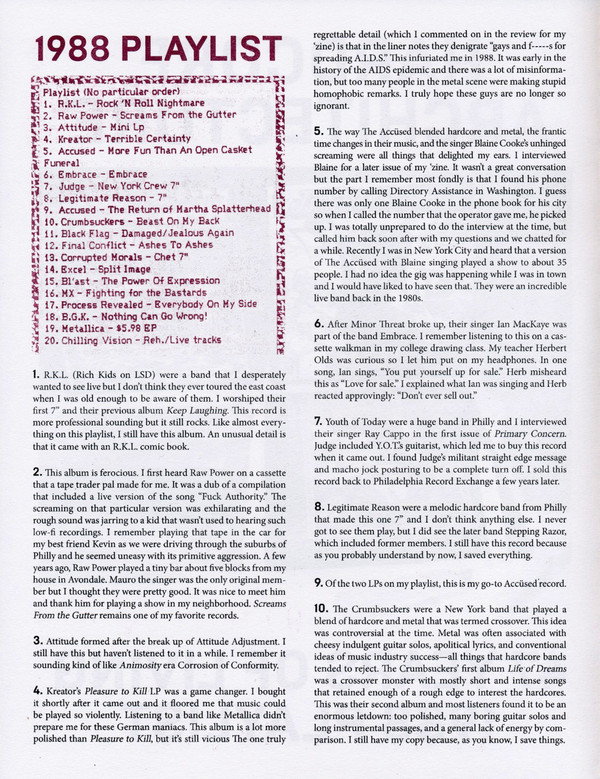