This timely installment of AREA delves into the current economic crisis to ask how people are dealing with it on a personal, group, and institutional level; conceptualizing alternative ways of producing art, pedagogy and knowledge; working towards something other than capitalist social formations; and developing an anti-capitalist language and aesthetic awareness. This issue is not to be missed and those outside Chicago will find its contents very relevant.

The editorial, from Daniel Tucker, asks the reader and the contributors to put their work and efforts into a broader historical perspective:

Crisis is not an unusual event for capitalism. This is something we have to be reminded of  for it is easy to forget since we are not often encouraged to know history beyond our own lifetime, or the lifetime of our parents. But maybe you were around for 1973/74 after the oil crisis and subsequent stock market crash. Or see if you can find someone alive from 1929-1933 when Wall Street crashed: maybe they will know someone from the period of 1873-1896 which was known as the great depression before the next few depressions took the title away. Even as far back as 1837 a depression was also caused by real estate speculation. These crises are a part of capitalism and if you ask someone who was in a precarious place during periods of relative prosperity, then they will tell you just how relative those periods were.

It has been a helluva challenge to keep up with the news over the last year. First it was sub-prime mortage meltdowns, then it was election season, then it was the series of mutliple and overlapping bailouts that never stopped. All that on top of changing strategies in Iraq, the inauguration, huge layoffs all over the labor market, and here in Chicago the buzz around Blago, Obama, and the Olympics is enough to occupy your thoughts 24/7. And that doesnt even leave much room for your own life to be drama-filled and exciting! It is enough to make your head spin, make you want to do something crazy, or to focus inward. But its important to try to understand what has actually happened, and what the strategic responses from below might be.

The contributions to this issue of AREA Chicago articulate a diverse range of responses to money generally and the current economic crisis specifically. Some of the texts function as proposals for where we should do in the face of exploitation or crisis. Others suggest more modest meditations on money, work and life. 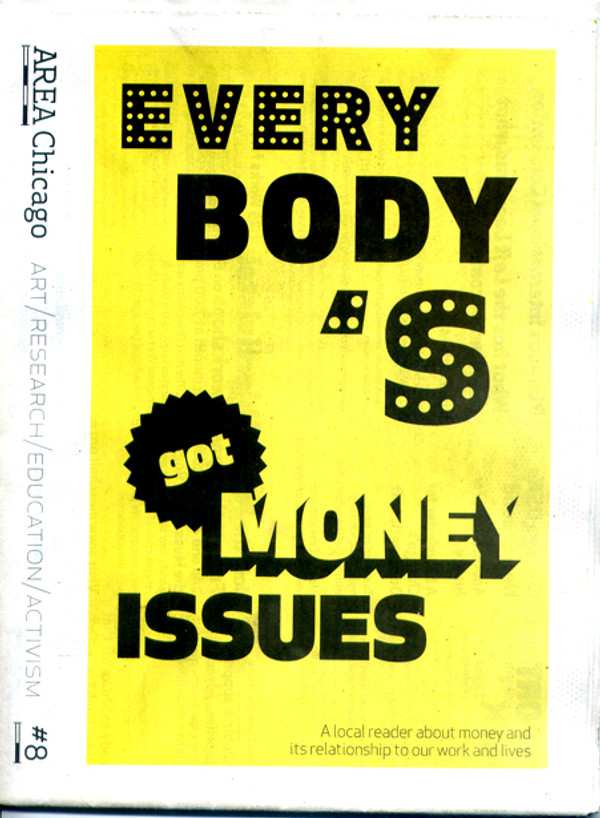